The “corporate partner merch tie-in” that we’ve heard about since summer was not only real, but we minted 30,000 of them in under an hour. Insanity. Let’s look at this massive drop from a few different angles.

I want to start here to give GFunk and team the shine they deserve. PV was center stage in one of the most hype NFT drops in history. I don’t think it’s ridiculous to say that the corporate apparel and media world was watching this drop closely (for those that weren’t, they’re definitely NGMI). And the next time WME calls a brand, studio, or production company on PV’s behalf, that call will be taken in a second.

I mean, think about this: adidas directed their customers to PV’s Discord for more information on the drop! And the new interest crushed the servers. Our little Discord sanctuary is still being held together with rubber bands and glue (and lots of work by Potamus and the mods!). That’s what adding 3x members in a weekend can do.

Love the Phase 1 NFT artwork. Remarkable. Not sure who designed the concept (if you know, comment or DM me), but it’s badass.

The NFT features a few pieces that have been announced in Phase 1 (hoodie, beanie, and tracksuit) and a few others not talked about much (Courtney’s Superstars, Indigo’s Forums, and GMoney’s Campuses). I bet we’ll start to hear some real chatter about these kicks. Nothing gets more hype than sneaker releases.

And I love that Courtney is our PV representative. As many have pointed out on Twitter, she’s becoming the face of PUNKS Comic. In a crypto / NFT world that is far too “dude heavy,” thinking that she’ll be the face of the comic for the next 10 years is thrilling.

But the real question is: wen adidas-branded Courtney choker?

Let’s put mega drops like this into context. adidas, Nike, Supreme. You name them, they’ve struggled with the insane load of users trying to buy product. They develop all sorts of complex ways to beat bots and to handle traffic. And most of the community is still bitter after every release because supply never matches demand.

As best I could tell, the adidas site had no issues and minting was very straightforward. The crazy gas wars that a lot in the PV Discord expected didn’t happen. I minted two for about .03 ETH in transaction fees. The combination of early access with both transaction and wallet limits was a huge success.

Now, there was the ser who minted 300+ using an exploit of the smart contract. I followed some of the conversation on Twitter, and it’s a fascinating topic that likely deserves an entire post at some point. Bottom line: developing transparent, smart contracts on the cutting edge of Web3 can result in really smart devs finding small windows to bypass the rules.

And there was the MAYC hiccup. Several MAYC collectors notified adidas that they couldn’t mint. adidas and PV did the right thing. Paused the mint, fixed it and got it right, then resumed. Of course, pausing the mint meant that some who had pending transactions had their transactions fail and lost gas. adidas intends to reimburse those that got hit.

Overall, a very solid technical release. Was it perfect? No. Will the team learn from some of the mistakes? Absolutely. But I think the team has every right to celebrate a massive drop with very little FUD 48 hours later.

Talk is that PV may use the 1480 ETH to invest in more CryptoPunks. Maybe it’ll be BAYC. Highly unlikely that it’ll be Clone X. Here’s my suggestion:

SpaceWalk.eth @space___walk
@Gfunkera86 @MetaHeroRetiree @brent9two @smems_ @wphof Can’t be a coincidence that a prime candidate to be a comic villain is listed at 1.4K ETH, the same amount in the $PUNKS treasury.
12:25 PM ∙ Dec 18, 2021

The adidas partnership (and BAYC + GMoney collab) is a clear success. It feels organic. Not overly corporate. And a net positive for all parties involved. I think the adidas thread this AM helps frame the success from their side:

adidas Originals @adidasoriginals
In the metaverse, challenging the impossible is the reality. On Friday we landed in the world of Web3 with one of the most widely-distributed NFT drops in history.  1/10
11:14 AM ∙ Dec 20, 2021
1,989Likes408Retweets

WAGMI United. PV is part of the WAGMI United group that is buying an English Football League team. Huh?! Alongside Preston Johnson (original investor in PV), Eben Smith, Gary Vee, Bryce Hall, Daryl Morey and others. This is insane. From PV’s perspective, it’s an investment, a partnership, and a sponsorship — um, PUNKS jerseys! Here’s a little of how GFunk talked about it in the Town Hall:

Yeah, Pixel Vault has invested in the team, but will also be a partner, facilitating NFT use cases within the organization. And we also plan to be sponsoring the kit for the team. We're not going to be involved with the actual management of the team, as I said, we have professionals who are well versed in running football organizations in place.

Pixel Vault more broadly, is about leveraging this technology to improve the entertainment experience. And there are all sorts of use cases that NFTs can unlock to improve the experience both in person, for people attending matches, and also for those watching internationally, via streams, ways to interact with players or special perks in stadium. Nothing's been finalized, but we're looking to sort of incorporate all of the other use cases that you've seen here natively in the NFT space in terms of utility brought to tokens. We're gonna see how we can incorporate that in running this club.

By the way, my suggestion for the squad they should buy is the Lincoln City FC Imps!

Comic #2: Elite Ape Versions. Based on the crush of demand for Comic #2, PV is working on an alternative release mechanic to make distribution a bit more fair. More news to come within a week or so and expecting this to be out by the end of the year.

Missing Elite Ape? There are rumors that Gold-Rilla may not participate in the drop. GFunk couldn’t speak much to it, though was hopeful it’ll work itself out.

Planet Giveaways. PV got some feedback that stacked releases (planet giveaways, Comic #2, etc…) made it hard for the community to keep track. They are being more intentional about staggering releases so no one misses out. On a side note, any unclaimed planets are going to the Founder’s DAO! Huge win for the PVFD.

Right Click Give. PV is donating a PUNKS Comic #2 and a “super special secret thing” to this awesome cause. The auction starts today!

Mints of Individual Panels. Great question from a community member got GFunk to go: Hmm, that is interesting… The idea would be to mint individual panels from the comics, either in an open edition or 1/1s. Love this idea. Let’s say there is a shout-out to the PVFD in a panel in the comic. Wouldn’t the PVFD members love to own that specific panel?! And 1/1s. What would the very first panel of Comic #1 sell for? 25 ETH? 50 ETH? 100 ETH?

Gamified $POW Staking. We’ve heard GFunk say that the gamified $POW staking would kickoff after the first, standard $POW staking period (six months). In this week’s Town Hall he hinted at a timeframe of “within a month or two of the end of the first staking pool.” Obviously, dates move around a bit when you’re building such a large project. But it’s good to hear an update on their thinking!

Some of this is speculative — as always, look for official announcements through PV’s Twitter and Discord accounts.

The golden beauty. Love the suitless variation, and this one takes the cake with the gold base and Uranus origin. She's owned by a collector who has a solid collection of XCOPY and Ghxsts pieces. They rightfully thought 5883 is worthy company. 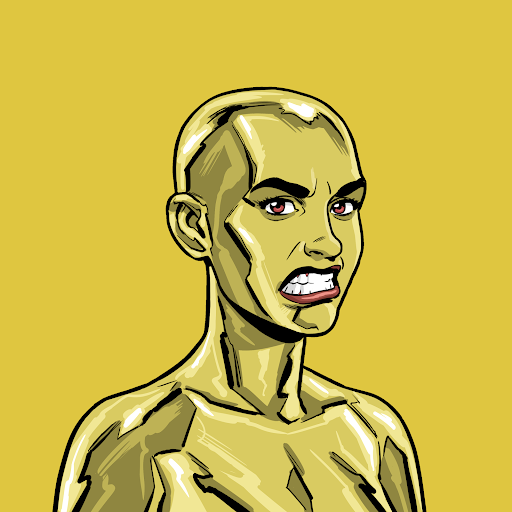 This is a bit of a farewell. Beanie announced that he’s not only stepping back from PV, but divesting all of his PV NFTs. I’ve seen a lot of angst in the larger NFT community about Beanie’s involvement with PV. And I don’t think it’s a coincidence that we’ve seen him take a backseat over the last two months — working with GFunk to make hte .

I know he’s polarizing. I get it. But bottom line, a lot of us wouldn't be this emotionally and financially invested in PV without him. His DNA is baked into the company.

Not to mention, he’s just funny. Gonna miss him…

Moving forward, this will be the Community Shine section. Lots of good voices in the PV community. We’ll highlight those voices on a weekly basis.

Beanie @beaniemaxi
Time for a thread 👇 On January 6, I stumbled onto the NFT scene. I was researching DeFi tokens and started reading about NFTX and that led me to CryptoPunks and a Gmoney thread that was popular on Twitter that day spending more than $100k on an Ape (a crazy amount at the time).
8:58 PM ∙ Dec 19, 2021
824Likes81Retweets