Oh and MetaVault is a podcast now too!

I set out to write about $POW and its centralized position within PV’s ecosystem. That’s going to be a fun, informative post for the community that I think you’ll enjoy.

Instead, we’re back on the BeanieGate topic.

Yesterday another stunning deep dive was published by an anon writer named Probably Shady that detailed ETH transactions between accounts allegedly owned and controlled by Pixel Vault and Beanie. The major takeaway from the article is this:

Beanie earned more than $40M in USDC/DAI from the projects above (PUNKS Comic #1, MetaHero Generative Identities and Planet Tokens, MonkeyBetDAO, Bloot) as well as $16M in $POW unrealized gain in the span of 7 months.

The article is full of speculation — and some of it is just plain wrong. The idea that Beanie is the CEO is laughable. Anyone following the company can very clearly see that GFunk is the executive leader. From the first Town Hall I listened into during JPEG Summer, GFunk’s professionalism jumped out at me. He’s a builder. He’s dedicated to the PV community. And when the company has faltered, he hasn’t just made it right, he’s innovated (e.g. the Comic #2 mint debacle, which turned into super fun Elite Ape Coin concept). He could isolate himself during these BeanieGate news storms, but he jumps in the PV Discord, he issues heartfelt statements via Twitter, and he shows up for two-hour Town Halls to take any and all questions. While I love PV’s art, tech, and game theory decision trees, I think a lot in the community are betting on GFunk, myself included.

And yet, the revelations from the article that detail how much money has flown out of the company into Beanie’s various accounts was jaw dropping. To think that all of the proceeds from PUNKS Comic #1 went into his pockets blows my mind. No startup would ever build a strategic growth plan that starts by taking all profits from its first product launch. If anything, the leaders of the startup would take no profits and reinvest everything to grow the team and capability. Not to mention that Beanie minted 1,000 comics with the knowledge that he was going to get all of that money back — while still retaining ownership of the NFTs.

This arrangement, where Beanie got large portions of the mint profits, makes me wonder about some of the dynamics behind the Planet mint. Remember, prices for planets were a lot lower when first announced (imagine picking up a Mercury for 1.5 ETH!). Why did they go up so drastically? Who would drive that decision? Did he push for higher Planet mint prices? And when the mint stagnated, did he push for dynamics behind the scenes to drive interest (e.g. free Jupiter Tokens for all minters) and therefore drive additional profits into his pocket? Or, just as likely, was the Planet token dynamics a strategic misstep? Something that happens every day by amazing companies.

It sucks that common project decisions can now be viewed through this lens. And while these kinds of questions are unresolved, it doesn’t matter much now, honestly. Beanie is out and GFunk and PV are no longer under the thumb of this ruthless profit seeker. In fact, I think it’s kind of remarkable that PV survived at all, let alone grew and became a blue chip company with soon-to-be-announced news of serious VC funding.

Bottom line, I didn’t sell any of my PV assets and bought a few more yesterday.

The PV ecosystem is growing. New NFTs. New collaborations. Lots of dynamics and shifting game theory. Lots of new collectors. But even some of us who have been around since May still find it hard to keep up.

The newsletter is one way to keep tabs. But a lot of people prefer podcasts. Including me. So I started one!

Well, we started one. My co-host is Brad Barrett, an absolute pro. He co-founded ChooseFi, a top 25 business podcast on the financial independence movement.

We struck up a friendship through the PV community and DM’d about possibly working together. After the new year we got more serious and talked about the show’s focus, a name, and how to get started. Brad’s experience accelerated the process to launch the show. And his mic skills are evident from the first 10 seconds of Episode 1. He guided the conversation and I held on for the ride! ha.

Our plan is to publish new episodes every week where we’ll cover the latest alpha and key releases. We'll invite people from PV to get the inside perspective as well as community members to talk about what's next, their collections, and the hard decisions in front of us.

We’re honored that The Virtunaut shared with us his song Killscreen to use as our theme music. I love the vibe and lyrics in this song and we’ll figure out ways to feature it more (and maybe other songs from him?!).

As for the cover art, we reached out to Pinballer — a PV community member who’s developing a comic book based on his MetaHeroes! — to ask if we could use some of his concept art as a background. He said yes! Can’t wait to get him on the pod to talk about his project.

And While the pod is not affiliated with Pixel Vault, we'll be a gathering point for the community. Interested in joining as a guest? We'd love to talk to collectors of all kinds: PV whales, PVFD OGs, derivative builders, and newcomers. DM me or Brad on Twitter!

Oh, and I think I’m supposed to say, “The pod is on all platforms: like and subscribe!”

“Investor Syndicate.” I mean, the impending VC funding can only be referenced in so many ways! GFunk tweeted that a deal with Beanie to acquire all of his PV assets was signed last week. That necessitated funding from VCs. The announcement has to be coming soon!

adidas NFT Updates. adidas released some news on the path forward. First physical redemption is coming in March. You burn your Phase 1 NFT, receive a Phase 2 NFT, and pay gas for the merch. This will be an interesting experiment for a brand the size of adidas. The initial mint was $800 (and prices are now about ($2,750). Gas on a transaction like this could be, say $50. I think there will be three merch phases and one final NFT phase, so say another $150 in fees. It’ll be interesting to see the reaction of people outside of the NFT community to the fees. And it looks like adidas is anticipating some negative chatter — they announced their next NFT will be released on the Polygon network, significantly reducing fees.

Origin Stories #1 Release. I detailed this in my Town Hall Recap and we talked about it on the pod, but the highlights are OS #1 will feature Courtney, cost .1 ETH, and can only be minted by PVFD holders. The release is limited to 5,902, the exact number of PVFD tokens.

$POW Grants. PV will use $POW from their treasury as grants to incentivize the community to build alongside them. For instance, I mentioned that Pinballer is developing his own comic book based on his MetaHeroes. I could imagine him pitching to PV and the community to fund his project to see it come to life. I bet he’ll release the comic before PV gets the $POW grants in place, but you get the idea.

MoonCat2878 went on a bit of spending spree this week and ended up breaking the ATH for a MetaHero generative identity: 40ETH! What’s the significance of this MH? She’s one of only two with a signature background — which makes her the second rarest MH in the collection. 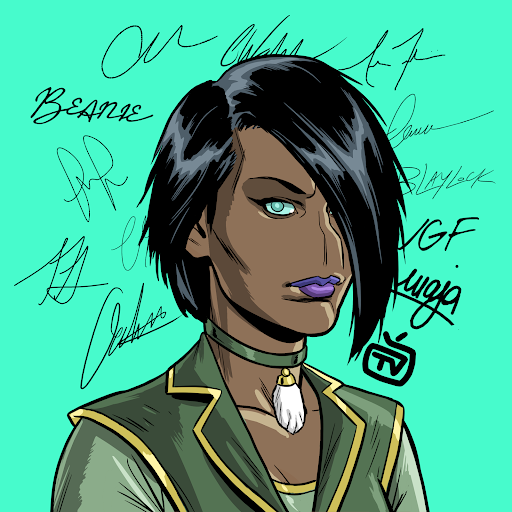 Let’s give some shine to Pinballer. His MetaHero derivative comic book is likely to be the first community-developed comic. The initial concepts are vibrant and fit in well with the official PUNKS Comics from PV. MH #1859, rocking the headband and Johnny Lawrence vibes, appears to be the lead character. Can’t wait for this to launch! 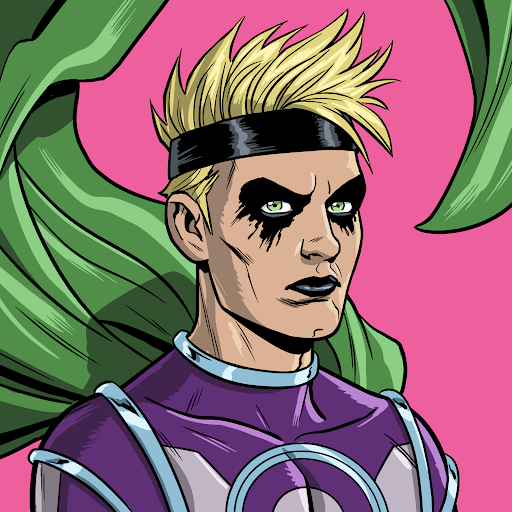