This will be a big week of news from Pixel Vault. I expect a lot more details on the mechanics of the Elite Ape covers and how the newly introduced Ape Coin will work. Then there’s the “big announcement” — GFunk hinted in the last Town Hall that a major announcement can be expected in January. VGF tweeted: “Preparing to melt some faces and blow some minds. If you thought the first few days of the year were wild… just wait.” Game Studio partnership? Artist collab? Netflix, Amazon Prime, Hulu, and Apple TV are in a bidding war to make the MetaHero pilot? Maybe we’ll get more info this week!

When I started this newsletter, I thought to myself, what’s the framework for how people want to keep up with all things Pixel Vault? I came up with: Weekly Alpha, Roadmap, By the Numbers, MetaHero Highlight, and the Beanie of the Week. What I didn’t realize is that Giancarlo Chaux came up with a similar (and better!) framework to analyze NFT projects called FABRIC (s/o The Governor). Let’s take a look.

F = Founders. Analyze the founders, who’s behind the project, are they people you can trust, are they building something for the long-term?

In our Pixel Vault world, all roads lead back to GFunk. He’s building something big with the community in mind at all times. When things go perfectly, he celebrates with us. When things go bonkers, he listens and responds. After a successful launch and good momentum, Founders analysis shifts to the team of builders around them. The strength of PV isn’t just GFunk, it’s leaders like Woodridge, Chris Wahl, Josh Blaylock, Odious, The Virtunaut, Chubes, and others.

I’d love to tell their stories more fully here in MetaVault. It’d be fun to talk to Chris about his influences, favorite comics, MetaHero design. To talk to Chubes about the night of the Moon exploit and how he balances pushing innovation while ensuring security. Bringing the team’s voices out would be a lot of fun and something I think the community wants. 2022 goals!

A = Art. Does the art resonate with you, does it bring you joy to have / hold / play, is it fun to engage with or think about?

Chris’s work is outstanding. The comics are beautiful and lots of individual panels blow me away. The work he and Odious (and others) did on the MetaHero design system is so fun. Josh’s writing in the comics captures the community and the story line with just the right balance of insider vibes. Raw&Rendered’s planet designs are on point. There’s so much to love in the art on this project.

One other element to the “art” of Pixel Vault is game theory. While this will certainly be mentioned below in the Innovation section, for me it’s just as much a part of the art experience. Excellent art makes the collector engage with the piece, whether it’s purely aesthetic (think Fidenza) or entirely experiential (think Marina Abramović). PV’s game theory hits hard. I’ve had more than one morning walk completely overtaken by working through the various PV game theory choices before me now and what GFunk and the team might be cooking up next. This is art too.

B = Blockchain Metrics. Is the collection selling, how many unique holders, are people mostly flipping or hodling, what are the ATH for the collection and rares, what’s the company doing with the ETH?

The beauty of the blockchain is it’s transparent (mostly). We can see when Elvis-P sells for 69.99 ETH. When a mutant sells for 20 ETH. We can analyze how the proceeds from a drop are divided, like the awesome deep dive economist did on the PUNKS + BAYC + gmoney + Adidas NFT release. We can build dashboards like PV community member tony-stark.eth’s newly released Pixel Vault Info Dashboard that captures all of the blockchain metrics we care about in a single place!

And the PV ecosystem is incredibly healthy. Lots of unique holders across several different collectible classes at different price ranges. Plenty of momentum. The only collectibles that are underwater from mint price are most of the planets. Based on some hints from GFunk, I don’t think that’ll be the case for much longer.

R = Roadmap / Utility. What’s coming next, what are the mid and long-term plans, is it a vibe project or a utility project, is the utility easy to understand and use, who are they looking to collaborate / partner with?

PUNKS Comic #1 was launched before the roadmap craze of JPEG Summer, but from the beginning PV communicated clear steps on what was coming next:

Since that time, the PV ecosystem has expanded significantly and their roadmap likely looks like a spider web with lines for PV (PVFD, PVDAO, TV/movie development), PUNKS Comic (Comic #3+, Origin Stories, $PUNKS, adidas NFT), and MetaHero (Cores, Generative, Sidekicks, Planets, $POW, gamified staking, gameverse). They’ve embedded utility into nearly everything, to the point that when there’s no utility for a given release the community gets kinda confused (wen Comic #2 utility?). The roadmap for the year ahead looks packed with releases, development deals, and partnerships.

I = Innovation / Importance. What’s unique about this project, what are they doing that moves the space forward, are they blue chip or maybe just forest green?

Again, from the start PV looked to innovate. Leveraging IP from CryptoPunks to create an entire world around the 16 original PV-owned Punks was new. And right at a time when Punks was on a massive wave of publicity. I mean, PV timed the release of PUNKS Comic #1 with the highly-publicized Christie’s CryptoPunk auction.

But they didn’t rest on “just building stories” around the Punks. The stake or burn concept introduced game theory with significant tokenomics. The mint pass concept was new to the space and now ubiquitous. The long mint window for the Planets. The forging concept for the adidas NFT. Not to mention the scale of the adidas partnership. 30k NFTs sold in under an hour!

Some of these are pure innovations and others are PV seeing cool shit in the community and bringing it in to this project. That mix is critical.

By the way, I think this is a place where Beanie should get more credit. The way GFunk talks about it, Beanie always had (still has?) an open line to talk through strategy and ideas. A lot of those ideas we know made their way into the project. S/o Beans…

C = Community. What’s the vibe from the collectors, does it feel like people want to hold or it’s just a cash grab, are there derivatives and community-led projects?

There are three primary places I go to see the vibe of the PV community:

That’s the FABRIC framework. As helpful as something like this is for the initial investment, I find it even more valuable when pushing chips into a mature project. Maybe this framework will help provide context to your current investment in PV and others as well.

$PUNKS and $POW. The market is open. A whole post could be written about these two tokens hitting the market at a crazy valuation, dropping (as expected), and now stabilizing at about $1.20 for $PUNKS and $0.25 for $POW. I’ve neither sold nor bought either token. Happy to be staking both and earning passively. Maybe in an upcoming newsletter I’ll loop in one of our community analysts to help us understand the price and valuation.

Ape Coins. No news since the December 30th Town Hall, but I expect more details to come out this week. This is gonna be a fun way to possibly land an Elite Ape cover.

Sidekicks. There were only about 100 people in the Core Drop Party hosted by VGF and the mod team in Discord, so I don’t know if word got out on the alpha that VGF dropped on Sidekicks:

Rarity Tools. We’re official! MetaHeroes is now included on Rarity Tools. And I’m honored to announce that SpaceWalk’s rarity rank is an astonishing #5773! While I may be in the bottom 7% for rarity, I’d like to think I’m in the top 10% for commitment to the cause! ha.

MetaHero Cores. Another 12 Cores were given away for free! Dingaling collected two more (now has six total). Damn that Dingaling! ha. And at least one community member won while holding only one Mint Pass… congrats FortuneApes.eth!

Some of this is speculative — as always, look for official announcements through PV’s Twitter accounts and their Discord.

Ok, sometimes a community tool comes along and completely outclasses my work! And I’m happy to report that tony-stark.eth’s PV Info Dashboard does just that. His numbers are always up-to-date and now a daily visit for me. Bookmark this goodness!

Moving forward I’ll highlight a number that’s interesting to me. To start:

One of the reasons I’m happy about MetaHero’s inclusion on Rarity Tools is trait digging (kinda like vinyl crate digging?!). Flipping through various traits is much easier on RT than via OpenSea. The mohawks are killer. Always loved them. All MH’s sporting mohawks also have glasses. But I never realized that some, as in 3 total, wear masks under the glasses! Kinda funky. Love the one below owned by the Canary Collection. 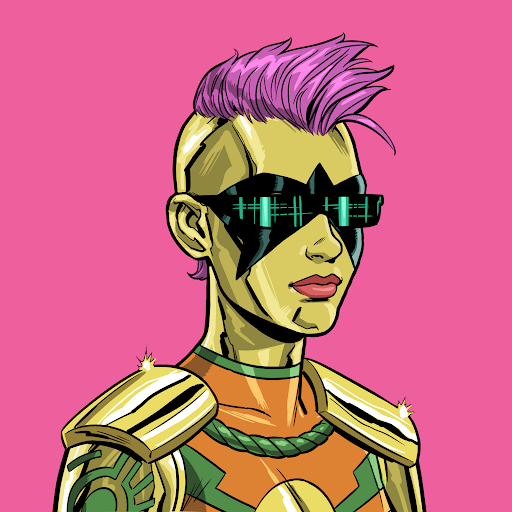 Juicy Jama is our resident tailor and derivative lord! During the holidays I got a DM asking if I wanted a custom Santa suit for my MH. Um, yes please! Love the blend of the Doodles and MH aesthetics. Gotta encourage this kind of awesome art from the community!