Showing love to the community's planet

This is MetaVault, a community-built weekly newsletter that tries to make sense of the Pixel Vault universe: PUNKS Comic, MetaHero, United Planets, DAOs within DAOs within DAOs.

On Thursday of this week, Jupiter DAO Tokens will be able to be claimed from the PUNKS Comic site.

It’s a claim, not an airdrop. So you’ll still have to go to the site, connect with the wallet you used to mint the planets, pay the low gas fee, and claim your Jupiter(s)!

The claim window will be open for one week.

And of course, for every planet owned you can claim a Mint Pass #2 to be redeemed for a Sidekick. Check the Roadmap below for timing on those elements.

Not Long for this Universe

3,085 Jupiter DAO tokens were minted before minting was paused. Remember, at the time we didn’t know if it would come back online. What would happen to the remaining Jupiter tokens? Did they disappear forever? What about the other planets? Would each each planet go offline?

The following day GFunk brought the People’s Planet into existence:

GFunk.eth aka Comicman @Gfunkera86
What this means for you: The first 23336 planet tokens minted (original minters - including those already minted) will receive ONE FREE JUPITER TOKEN CLAIM PER PLANET. Jupiter shall hereafter be know as the "Planet of the Loyalists." Long live Jupiter!

And with that, everyone became a Jupe (Jovian is the official name for someone from Jupiter, but that doesn’t sound as fun as Jupe — I mean, Jupe just lends itself perfectly to !jupe = !vibe).

This was huge news. An extra planet and Sidekick for all minters. Not one per wallet. One for every single planet minted.

It also broadened the playing field. Of all the planets PV could’ve selected to run this mechanic through, they picked the sixth planet to be developed (after the Moon, I assume). If you minted Uranus or Neptune at .5 ETH because that’s all you could swing, those planets will be developed toward the end of the dev process. Now you’ve jumped ahead a few cycles to start playing and earning on your other home planet.

“DAO everything. Find your own light.” — Buddha

I don’t have clear number on unique planet owners, but let’s use something similar to the 9,751 PV Unique Owners (which includes Comic #1, PVFD, MetaHeroes, and MP #1). 9,000 Jupiter DAO Token holders. We all own part of the decision making on Jupiter. We all reap rewards from any funds earned on the planet.

What do we want to do, Jupes?! Become the most formally structured DAO governance body? A modern, collaborative policy making org? A hilarious bureaucracy like Terry Gilliam’s Brazil that’s based on paper and pneumatic tubes? Do we want to partner with our fellow planets or become isolationists? What about collaboration with other NFT projects? What about our own generative mint? Our own token to be staked for $JUPE?!

The future knows no bound…

If you haven’t read the Town Hall Recap post, go there now. Lots of alpha. Here’s a quick summary:

Comic #2 Minting. The claim window will be open for two hours for PVFD, then open for four hours to all PV token holders, and then public after.

Elite Apes Week. Special covers for each Ape. Releases are expected to be the week of December 14th.

$PUNKS2. Still being figured out, but essentially the money generated from the Merch NFT sale would go to buying more CryptoPunks that are then held in a second bucket ($PUNKS2), separate from the original 16 ($PUNKS1). You would stake $PUNKS1 to earn $PUNKS2. Crazy!

Origin Stories. Courtney’s backstory will be the first storyline. PV is in talks with a prominent, known artist to put his style on the comic.

The only Smog mask + Noxious suit in the universe is a Jupe! Also an Alien Hero. 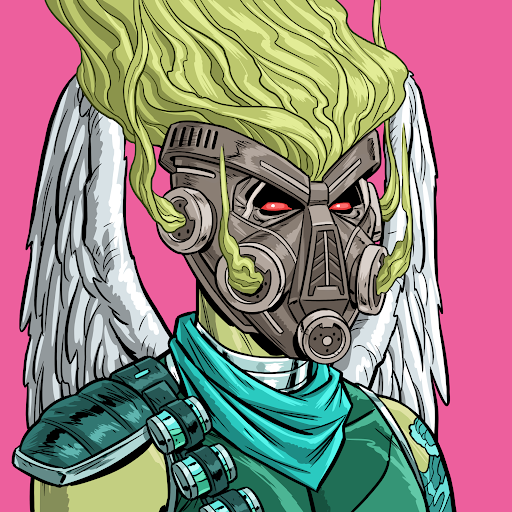 Despite Beans being very busy shearing sheep, he did spotlight a big member of the community, Rusty, who dressed up his MH with a slick custom background!