What's the future of the Pixel Vault Founder's DAO?

This is MetaVault, the best way to keep up with the Pixel Vault universe: PUNKS Comic, MetaHero, United Planets, $PUNKS, $POW, and lots of DAOs.

Before jumping into the post, a quick reminder that I launched the MetaVault podcast with my co-host, Brad Barrett. Every week we dive into the latest alpha and project dynamics with frens from the company and community.

And remember, you can always find me on Twitter and via email.

I minted two comics on May 20th knowing I would burn one and stake the other. I wanted to take both the red and blue pill. Comic #1 is legendary. It established the brand, the design ethos, and set the path forward for how PV products exist in the world. The value is inherent.

The Founder’s DAO token, designed by Fvckrender, feels more alive and ready to evolve. Let’s look at the Assets, Community, and Value of the PVFD today.

Assets. There are a trove of amazing assets owned by the DAO: fine art, some donated Apes, and every first mint from PV releases (though the first mint of each Elite Ape cover will go to the Elite Apes, the PVFD gets second mint). There’s the $PUNKS treasury that sits at 1,480 ETH from the MetaHero and adidas sales. Then there’s the insane bounty of unclaimed planet tokens which totals 6,494 planets valued at 2,783 ETH (or close to $9M) — which by the end of the month should result in 6,494 Mint Passes #2 when that claim goes live.

Community. But more than the assets owned by the PVFD, it’s the community. There are 2,916 holders who are passionate about the project. We ape into every PV release — sometimes so aggressively we elbow out our fellow PVFD holders, not to mention everyone else! We push the company to innovate and exceed very high expectations. We’re normally the frens in the Town Halls asking deep questions about long-term strategic plans (and world famous producer ice trays). In the PV Discord, the founders-dao channel is a constant stream of alpha. Frens share upcoming projects that might pop, stuff they’re actively apeing into, metrics on whale buying, and poking fun at each other for minting horrible projects that definitely didn’t make it. And it’s in the Discord channel where GFunk and the team communicate most directly. When shit gets real in the community, it’s most real within the PVFD.

(Side Note: not a lot of what’s said in the PVFD Discord channel gets out to the public. There were hints far in advance of the official adidas partnership announcement that they were in fact the “corporate partner.” But the PVFD held it down. I respect the PVFD membership and rarely bring conversations there into the light. However, on the recent MetaVault pod I read a direct quote from a GFunk Discord post in the PVFD channel because I felt like it summarized the amazing human and leader he is.)

Value. And lately PV has driven value to PVFD holders. We were the first (and only) to mint Comic #2. We qualified for two coins for the recent Elite Ape Coin drop. There’s the upcoming Origin Stories issue #1 that will only be mintable by holders. There’s the mysterious pfp project being led by Odious. Then there’s the growing list of PVFD allowlist entries for new projects. Cool Pets is a good example — the PVFD got 200 entries.

While all of what we have today is valuable, where the PVFD goes next could 10x the value. Here’s where my head is.

From Club to Organization. The PVFD in its current iteration feels like a club. We want to see the mother ship succeed, we hype it up because we love it, and we share “stock tips.” But we’re not organized. We have no mechanisms to assert control outside of moaning in the Town Hall — alongside all other collectors. Sure, PV is building some tools to make it easier for us to pitch and vote on various proposals. But we’re waiting for them. We have no leadership. We have no real input. And I’m not suggesting we should have input into what the company does. This isn’t a conversation about the PVDAO situation — I wrote about that a couple weeks ago. This is about what the PVFD wants to be in the larger Web3 / NFT space. We have some highly influential PVFD members who can elevate our message quickly. If we want to make this the premier DAO, we need to organize our way there, not wait for PV.

What’s the Mission? What do we even want to be? What goals do we want to serve. Do we want to be an art collective? Doesn’t seem to fit the current ethos well. Should we buy into other blue chip projects (Apes, Kongz, WoW) to hold or collaborate with? Or maybe we should buy PV assets and build our own projects. Abraham — a PVFD member, co-founder of his own DAO, and someone who is actively building tools to make it easy for anyone to start their own DAO — had a very interesting point in a past MetaVault pod:

During that conversation, I posited that maybe we could make our own “cores,” and Abraham lit up with “Why not?!” We could use treasury funds to buy interesting MetaHeroes and contract a writer to tell their story.

Is our mission to protect PV? Provide direct input into their products? Are we happy to see the PVFD token value rise steadily with other PV assets? Or do we want to build alongside PV with our own projects that drive value to the overall brand? Do we want to grow our influence in the PV ecosystem? Are we squarely focused on increasing the value of each PVFD token? These questions are important to work through before we begin building.

Passive vs. Active. It comes down to this choice. Do we want to be a passive group who are excited to be around the action? Or do we want to be an active organization who is building from what PV has established? Would we be happy to be invited to a Pixel Vault NFT.NYC event? Or would we be more happy by using treasury funds to host our own PVFD NFT.NYC event?

The NFT.NYC event example is silly, but demonstrative. A better example is the Cool Pets allowlist. PV set that up for us and it was greatly appreciated. Why couldn’t we reach out to top tier projects and get access to allowlists for PVFD members on our own? Why couldn’t we reach out to other IP / media projects like Jenkins the Valet to establish licensing agreements for the MetaHeroes owned by PVFD holders? Why couldn’t we use treasury funds to provide PVFD grants to community members who want to drive value to the PVFD? PV will likely start providing $POW grants to meet their objectives to grow the MetaHero Universe. We currently have a ton of ETH, $PUNKS, and will soon be staking thousands of PVFD-owned Sidekicks and earning $POW. How could we use that to actively build within the PVFD?

The “autonomy” in DAO is our pivot point.

PVFD 2.0. What do we want the evolution of the Founder’s DAO to be? And what do we need to make it a reality? One suggestion that immediately comes to mind is a new home. I tolerate Discord, mostly. It serves a role, but is not an enjoyable place to spend time. Regardless, a single founders-dao channel results in a continuous swish of hard to parse noise. When we start drafting proposals and voting, we’ll need more channels or our own server. I’d love if we had tools outside of Discord. Thinking about some of the capability that Jenkins built, dedicating funds to make the interface for our membership straightforward and fun to use would be a huge success. How would we fund those kinds of tools and the people needed to build them? That’s likely a larger question about how we manage, maintain, and grow the treasury. One initial thought would be to drive a percentage of royalties from PVFD token sales to our treasury.

If we organize, establish a clear objective for what we intend to be, and prioritize building — the Founder’s DAO has an opportunity to be very special.

MetaHero Universe Medium. PV launched a Medium home for the MetaHero Universe. Great to see their communications increasing! Since Economist was brought on as the Director of Comms, we’ve seen a nice uptick in the quality of comms.

The United Planets DAO imagines $POW as the lifeblood for the future gaming ecosystem, and as such, has partnered with Pixel Vault, Inc. in building out the two-tiered approach set forth below.

It’s my belief that the UPDAO doesn’t exist currently. Nothing has been formally put in place that would account for both PV-owned and community-owned planets. Something worth digging into in future newsletters.

Odd Punks Comic Sale. The PV-controlled wallet with all of Beanie’s recaptured assets had some odd activity recently. It first transferred two Punks Comics #1 to an account with no other assets. Then that account accepted offers for 3 and 3.5 ETH.

With Elite Ape Special Edition covers releasing tomorrow, let’s remind the community that there are 19,248 total Elite Ape Coins. 6,000 of those will be burned tomorrow to mint the Special Edition covers. We’ll be left with 13,248. Hmmm. What could be done with that many NFTs? Tropo said in a First Mint-hosted Twitter space today that the Elite Apes have a meeting with PV tomorrow to talk about it…

My absolute favorite Core was sold a few days ago for 88 ETH! The Matta-0 design is bonkers. Can’t wait for the lore around this character. 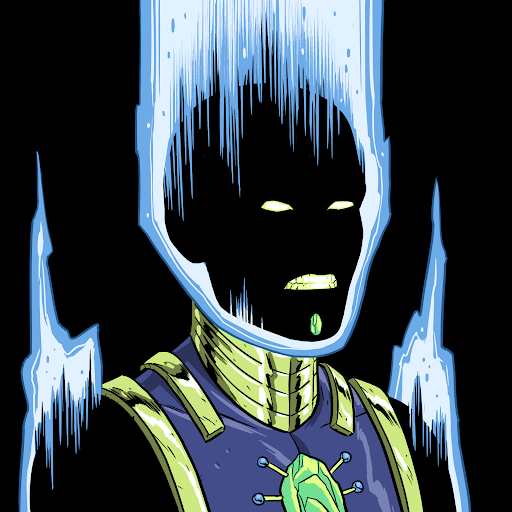 BCheque is a boss in the PV community. He’s been providing in-depth analysis on various elements of the project since JPEG Summer. His live tweet threads of PV Town Hall’s are essential. His newsletter covers all things NFTs and is a resource I’ve sent to several normie frens to get them up to speed and onboarded. Follow him!