The PV team held a big Town Hall this past week. They announced the sequence and timing of the next batch of activities, giveaways, and releases (with the caveat that dates are subject to change). 2021 is ending with a BAM!

Jupiter, Je t’aime. Oh, how we love Jupiter — despite her offline attitude. All planet minters will be getting their Jupiter DAO tokens the week of November 22nd. This will act as a claim, not an airdrop. We’ll have to go to the site and authenticate with the wallet that minted the planets.

Staggered Release. In classic Pixel Vault style, the team listened to the community and will address the supply shock concern with a staggered release of the giveaways. Instead of dropping 40k+ planet tokens in an instant, every week they’re giving away tokens, starting closest to the sun (Mercury and Venus). The snapshots will be staggered too, which is awesome for people still working their way to a genesis PV asset (Comic #1, PVFD, MetaHero, Mint Pass #1). You have until the last weeks of December to acquire a genesis PV asset and be eligible for the planet giveaways.

CtrlShiftN created slick spreadsheet to help community members figure out what their chances are in the giveaways.

Stake and Potatoes. In the last week of November, holders of PUNKS Comic #1 or a MetaHero will be able to stake their asset for $PUNKS or $POW tokens, respectively. It’ll be interesting to see what the price of these two tokens does upon launch and in the subsequent months. And maybe more interestingly, what does it do to the floor for the comic and MH? Reduced supply on the market could drive higher floors.

Staking Valuation. Someone like Economist, CtrlShiftN, or Abraham is much better suited than I am to help the community understand what valuation to expect. There’s some good analysis in Economist’s original stake or burn post. Maybe we could peer pressure one of them to write a Staking Valuation guest post in the MetaVault newsletter the week before staking launches… 🤣

What? Let’s unpack this super interesting mechanic that GFunk was calling Forging.

This “Forging NFT” concept could be huge, not just for PV, but for both the NFT and apparel industries. Why would a major apparel company want to take a risk with new IP, even IP as successful as PV or BAYC or Cool Cats or CryptoPunks, and leave themselves exposed to the possibility of mounds of unsold merch? It has to be hard for their forecasters to estimate how many BAYC hoodies they could sell. This mechanic offsets that risk entirely. All of the funding is secured within the launch window. Demand will immediately be known and production will be spun up to match.

I foresee Forging NFT tiers in the future where a Tier 1 can claim any two items, Tier 2 can claim 1 hoodie, and Tier 3 claim buy 1 t-shirt — for every drop! I think we’ll have Merch Season Passes. Buy the Summer Season Forging NFT and get merch from all drops for the summer.

Everyone likes to talk about the Supreme-indication of the NFT world. Wouldn’t Supreme love to sell a “T-shirt Season Pass Forging NFT” for $1,000 ( < .25 ETH) that allows holders to claim a t-shirt from every drop in their Fall release schedule? Maybe they use Chainlink VRF to giveaway BOGO hoodies to T-shirt holders. The mechanic would drop mounds of money in their pocket on the day of minting.

Sorry, got carried away there a bit. But I love this concept.

A Couple of Communities

Did I hear this right?

… this merch drop in collaboration with this large corporate partner and a couple other communities here in the NFT space.

GFunk said “a couple of different communities” multiple times in the Town Hall. Ok, so we know there’s the mysterious corporate partner and BAYC. Who else? Cool Cats? Toadz? Bloot? Is GFunk finally extending a loving hand to the Blooters out there?

As if there wasn’t enough alpha, here’s a bit more:

Dark Moon. And so it begins, the market valuation of the Dark Moon.

POAP for 6-month Anniversary. At the beginning of the Town Hall VGF announced that a Chris Wahl-designed POAP would be released during the Twitter Space to celebrate the PV 6-month anniversary. Super cool!

Origin Stories. Some juicy tidbits from the Town Hall. GFunk:

The first I would say one or two will likely be dropped through our traditional channels and will likely be restricted to Pixel Vault holders in general. And then we're looking to do something that makes Origin Stories publicly available and really expands our community moving forward — likely with issue three.

So depending on the timeframe, that, what will I call it? Partnership — will likely take shape sometime in January or February. But we are looking to get a couple of origin stories out before the end of the year.

PVDAO Airdrops. At the very end of the nearly two hour Town Hall, GFunk goes and says this:

I have talked about how our set holders will get these exclusive pools of tokens once we convert to PVDAO. And with some of our more recent conversations that have stemmed from NFT.NYC, I may be accelerating that timeline.

So the conversion to PVDAO is obviously a huge step for us. You know, I would like to keep some level of control over the business in its infancy, but as this is a Web3-focused business, we do want to open it up to the community and reward the community in a very real way — as you all have helped build this alongside us.

So similar to what you've seen with, you know, now ENS a couple of days ago, Super Rare did this months ago and sort of paved the way for this mechanic of drop. But it would be those that hold assets and have participated in our ecosystem, that would be receiving these tokens. So set holders would be receiving a special allocation of those tokens.

With all of the updates above, I have a shortened roadmap update here. A lot of this is speculative — as always, look for official announcements through PV’s Twitter accounts.

The first Mutant minted, the first sold. S/O to MetaHero320 — an active member in the Discord and PV Twitter. 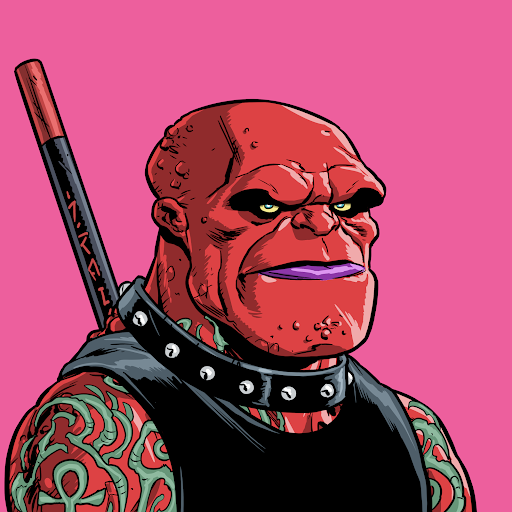 Beanie of the Week (BOTW)

Solid dig by Sunshinetrader and good comeback from Beans: