MetaVault #14: When Web3 Walks into a Bar, It Acts like it Owns the Joint

This is MetaVault, the best way to keep up with the Pixel Vault universe: PUNKS Comic, MetaHero, United Planets, $PUNKS, $POW, and lots of DAOs.

Before diving into the post, I want to address the slow output lately from this newsletter. The first answer is the MetaVault podcast has taken a bit more focus than originally expected. Coordinating great guests like Ned Ryerson for last week’s pod and Rusty Sailor for this week’s… recording with my co-host Brad Barrett… then editing, publishing, and promoting it on Twitter. I love the process and have learned a ton, but it’s time consuming. I created a new section here called MV Podcast that will provide links to all of the pods moving forward. Down the line, maybe we’ll do show notes and full transcripts.

The second answer is I’m launching another newsletter with my fren FilmBook that’s focused on Jenkins the Valet. Our co-written MetaVault post “Say Hello to Jenkins,” which compared the project’s scope and ambitions with Pixel Vault, telegraphed my rapidly expanding interest. The minds behind Tally Labs — Jenkins and SAFA — are true storytellers, technical innovators, brilliant product developers, and good humans. Getting Valet Confidential ready for launch took a great deal of energy. But I’m really excited to see it spread its wings. We have a ton of fun ideas that will make it an enjoyable read… starting with our first post coming next week!

Now that the excuses are out of the way, I’ll reassure you that I have lots of drafts for future MetaVault posts on topics like passive income via staking, the DAO user experience, 2022 roadmap, and what we’re buying when we buy a PV product. Oh, and more interviews and roundtables with frens from the community… and maybe company too?!

Now to the actual newsletter.

A strange, exciting thing happened recently and I just happened to be in the right place at the right time to realize it.

GMAN is an early Bored Ape collector who leaned into the IP. He established a character called Lone Star Sacca based on his fully-cowboy’d Ape. With that character he entered the Pixel Vault Elite Ape contest and ended up winning! What’d he win? A feature in Punks Comic #2 alongside seven other Elite Apes. He even got a snazzy cover drawn by the uber-talented Chris Wahl on the Lone Star Collector’s Edition, which sold out at release.

The story turns again when Lone Star announces that anyone holding his Collector’s Edition cover will be entered into a raffle to win an allowlist spot for a new project called Moonlings. What’s a Moonling, you ask? A MetaHero derivative project launched by several Founder’s DAO members.

Let’s untangle this lovely tale of Web3 IP ownership (as my fren BCheque likes to point out: Web3 = read + write + own.)

Larva Labs creates CryptoPunks in 2017 with an ambiguous IP ownership model. It’s not exactly free commercial use, but they’re not fighting you if you build IP around your Punk and profit from it.

Pixel Vault enters stage left. They acquire 16 Punks, create IP around them, and launch the Punks Comic brand. This is our first Web3 IP ownership leap and derivative.

Around the same time as the Punks Comic launch, the Bored Ape Yacht Club launches with 10,000 very bored apes and allows full commercialization rights for all holders.

GMAN buys into Punks Comic, then a few weeks later acquires a few Apes (listen to his guest appearance on the MetaVault pod for more details!), one of which is a cowboy’d Ape with tons of vibes. GMAN calls him Lone Star Sacca. This is the point where the collector’s journey transforms from purely collection to creation.

A couple of months later Pixel Vault conducts a contest to select eight Bored Apes to be featured in Punks Comic #2, effectively licensing Apes owned by their holders and sharing in profits generated from the comic sale. Important to note here that Pixel Vault didn’t partner with Yuga Labs, the creators of BAYC. They partnered with the owners of the individual Apes.

Now as a creator, GMAN collaborates with the creative team at Pixel Vault on how best to depict Lone Star Sacca in Punks Comic #2. The team comes up with great art and the lonesome cowboy is wonderfully depicted in the comic. It’s a Bored Ape, but drawn in Punks Comic style with a distinct storyline around it. This is our second Web3 IP ownership leap and derivative.

The Collector’s Edition covers release and sell out. GMAN shares in the profit of his Lone Star Sacca cover. And now there are 750 NFTs out in the wild that are tied back to his licensed Ape derivative — distinct assets that carry forward their own value and membership.

Late summer 2021, Pixel Vault launches MetaHeroes, a 10k generative project that also provides full commercialization rights for all holders. The MetaHeroes have a distinct comic book style and feature tons of fun traits, to include planet origin. Curiously enough, no MetaHeroes originate from the Moon… hmmm.

A MetaHero derivative project called Moonlings is announced that uses various traits and similarities from the MetaHero style on these cute little creatures who live on the Moon. It’s also a 10k project and the first Pixel Vault approved derivative. This is our third Web3 IP ownership leap and derivative.

GMAN announces that holders of his Collector’s Edition covers are automatically entered into a raffle for inclusion on the Moonlings allowlist. Ownership of one asset brings the possibility of ownership of another asset.

So, just to take a quick count of all of the “entities” involved to get us to this point: Larva Labs, CryptoPunks, Pixel Vault, Punks Comic, MetaHeroes, BAYC, GMAN, Lone Star Sacca, Moonlings. Some of these entities are formal companies. Others are projects. Some are actual people. Others are avatars.

Was there direct coordination amongst all of these entities throughout the process? No. Did they have to sign 300-page agreements? No. Are proceeds from the Moonlings mint going back to Larva Labs? No.

Heroes Follow Heroes. Well, looks like the Beanie pfp giveaway was real! Kudos to PV for making this a reality.

MetaHero Universe 💫 @MetaHero_
In an effort to engage the early MetaHero Universe community after its launch last September, the Heroes Follow Heroes giveaway was created. Today, an exclusive MetaHero themed ERC-1155 commemorative token will be airdropped to qualifying collectors.
medium.comAnnouncing the “Heroes Follow Heroes” AirdropThis NFT is an art collectible independent of the official Pixel Vault ecosystem, and zero secondary sale royalties will be received.
1:04 AM ∙ Feb 24, 2022
114Likes24Retweets

Beanie Remerges. Speaking of the hatted one, his Twitter rose from the dead and he’s back to shilling projects.

Community Calls. VGF and Economist have hosted some fun Community Calls on Twitters Spaces, asking members of the community to join them on stage and sort of co-host. I was happy to join the first one. It’ll be fun to watch as these evolve. I don’t expect us to get major alpha through this channel. They’re mostly a vibe sesh. Ned had a great question this week as a co-host that asked for PV employees to share what it’s like to work there.

Unofficial Community Spaces. Chase, a PVFD member, is hosting weekly community spaces where we can get together and dive into various topics. This past week he invited PV employees (MamaDukes, Economist, and Potamus) into the space as well. MamaDukes, the Director of Talent and Culture, laid out the best approaches to getting hired at PV.

PV Executive Hires. During Chase’s unofficial space, MamaDukes mentioned PV is hiring several executives who will be tasked with building out their departments. Then we got this tweet from an adidas exec about PV’s impending CXO hire:

HeyErikaWS @heyerikaws
I’m in Milan. Just had a late night call with @Gfunkera86. Talking about his new CXO. The future is so bright it hurts my eyes. I’m so proud of the fact my friends are working with my friends. Therefore I get to work with all my friends. & no there is not an airdrop this week
12:40 AM ∙ Feb 24, 2022
105Likes4Retweets

DAO Setups. Through a nomination process in the PVFD Discord channel, 10 members of the Founder’s DAO were selected to build initial momentum around the DAO: Richard, Rusty, Ned, renegademaster, schmoe, harristotle, BCheque, Thomsen, Adrian, and myself. We held our first call with PV on Friday 2/25 where we talked about some of the parameters to process a proposal off-chain. More to come!

Defi Gaming Expansion. In this week’s PV Community Call, The Virtunaut said the game’s design is growing and more complex than originally planned, and will not launch immediately after Stage 1 staking concludes.

Official Medium Sites. Lots of good content getting released on the Medium sites: MetaHero Universe, Punks Comic. PV plans for these platforms to become collaborations between the company and community. Interested to see it evolve.

$PUNKS for Voting for OS#2 Direction. PV announced… something. It’s not clear what $PUNKS token holders means, but this will be good to follow.

$POW Distribution Wonkiness. Community member connor sykes brought to light the low distribution of $POW to current MetaHero stakers. When this topic was addressed in the Community Call, VGF said this was by design and confirmed that all 200M tokens will be distributed in Stage 1. But he and Economist didn’t go into how PV will alter the algorithm to ensure full distribution.

I don’t know who BlackKettle is, but damn: 582 planets and 13 planet sets (via Dune). That’s next level conviction in the MetaHero Universe! Maybe I can get in touch and pick their brain on what attracts them to this ecosystem.

Strobe mask, Lightning face (blue no less), Graffiti base, and Jupiter’s pink hues in the background makes this a killer combination of traits. Ranked 372 on rarity.tools. 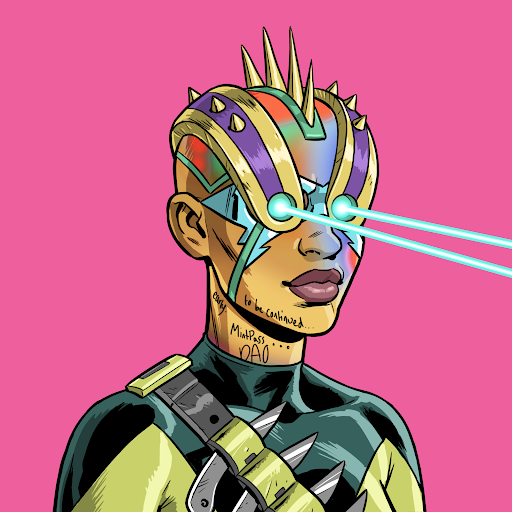 Gotta give Chase a ton of credit for hosting the unofficial Twitter Spaces for the PV community. The last space was well attended — hovering around 200 people. I remember when the early official PV Town Halls were at that number (though now regularly exceed 1,000!). This is the kind of self-supported activity we need more of from the larger PV community. Let’s grow and build together!